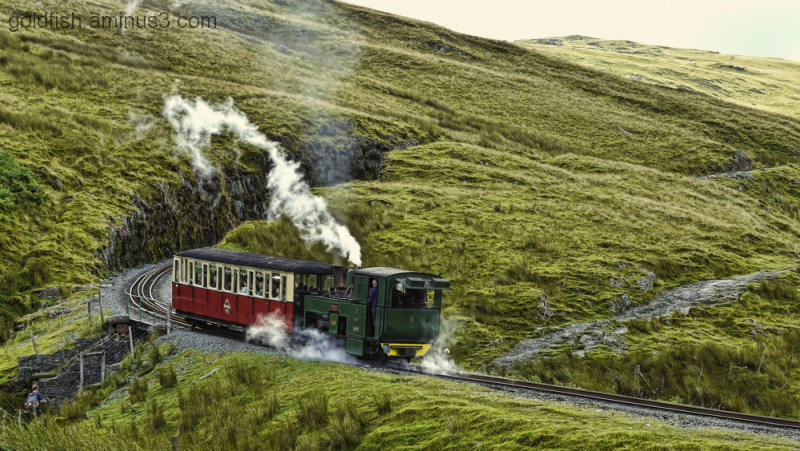 Posted by Jules (Drayton, United Kingdom) on 25 January 2013 in Transportation and Portfolio.

Engine No2 "Enid" was named after Assheton Smith’s (landowner) daughter who cut the first sod in Llanberis in 1894. It is estimated that she has covered enough miles in her history to reach the moon and back four times.

The Snowdon Mountain Railway - Rheilffordd yr Wyddfa is a narrow gauge rack and pinion mountain railway in North Wales. It is a tourist railway that travels the 4.7 miles from Llanberis to the summit of Snowdon.

The railway is the only public rack and pinion railway in the United Kingdom, and after more than 100 years of operation it remains a popular tourist attraction. The railway is operated in some of the harshest weather conditions in Britain, with services curtailed from reaching the summit in bad weather and remaining closed during the winter from November to mid-March. Single carriage trains are pushed up the mountain by either steam locomotives or diesel locomotives.

To ensure the trains were able to embark upon the steep and continual gradients of Snowdon safely, the newly formed Snowdon Mountain Tramroad and Hotels Co. Ltd went to Switzerland to find the best mountain railway technology. A German engineer, Dr. Roman Abt, had patented a rack and pinion system that was being used reliably in the Swiss Alps. Whilst in Switzerland the company purchased three steam locomotives and they arrived in Llanberis in 1895 to help with the construction, a further two trains arrived in 1896 when the railway opened.

Outstanding work with the post processing Jules, the local details are excellent.

great treatment here and an awesome place, I love it

Excellent shot and processing.. One of the beautiful place I have visited.

A glimpse of another world . . both in Time and Space !

I'm sure you would like this one for e.g. http://www.bahnfilm.ch/perren/PE109_Bahnen_an_der_Brueniglinie.html

Superbly captured going into this cutting, a beautiful image Jules

Wow the way the track cuts into the mountain is fantastic, the don'y make engines that last like that any more.

Excellent shot of Enid chugging away merrily...and thank you for all the interesting info :-))))

Great scene with so much to offer.

Another gorgeous image of this pretty train ;)

Love this, would make a great painting

Beautiful impression of movement in this splendid landscape! Superbly composed!

Excellent framing, it is beautiful this train in its environment of greenery. A very nice picture, I like a lot.
Have a good weekend.

A fantastic shot indeed. Have a great weekend.

I would say is so beautiful shot

Beautifully presented, the smoke is definitely a highlight and the tones in the green and saturation are perfect :)

Gorgeous color. The landscape is beautiful. That is quite a hard working engine.

Great perspective and details on the landscape ... such a cool looking place!

Wonderful detail and color and comp. This is one of those photos that you want to jump into and be a part of the ride.

perfectly composed, and i just love the treatment !!!