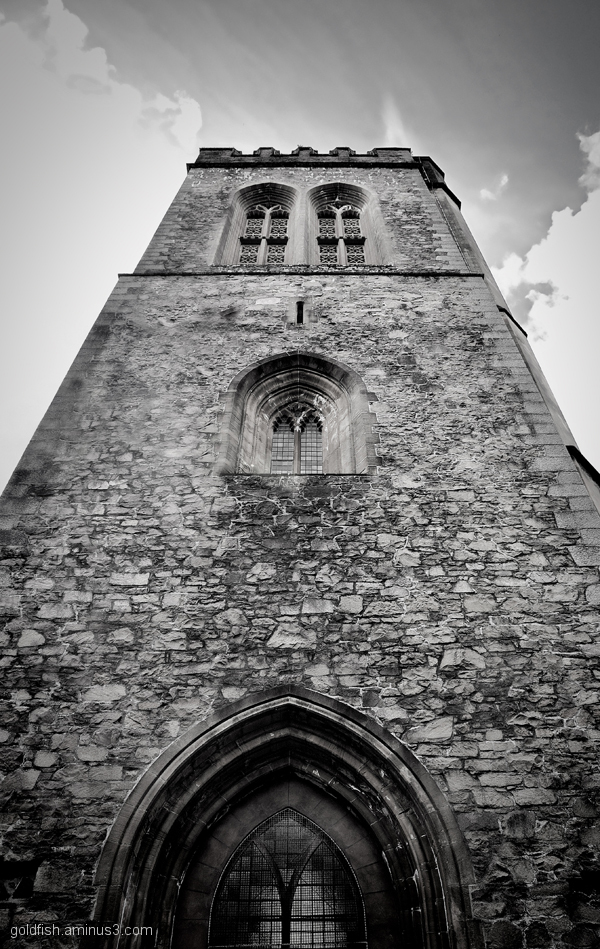 Posted by Jules (Drayton, United Kingdom) on 29 September 2012 in Architecture and Portfolio.

Up close and personal with the All Saints Bell Tower - Join me tomorrow when I'll show you the spectacular view seen after climbing the 176 steps to the roof top.

In 1914 the 10th Duke of Argyll, Niall Diarmid Campbell, became the Honorary Colonel of The 8th Battalion of The Argyll and Sutherland Highlanders. When the First World War ended he decided that there should be a fitting memorial to commemorate the Clan Campbell dead. To this end he commissioned architects Hoare and Wheeler to design the Bell Tower, the original idea being to link the new tower to the church.

At the same time John Taylor and Company of Loughborough were approached to cast a peal of 10 bells suitable for the memorial. The bells were cast in 1920 in Loughborough. Their transport from there to Inveraray, which took place in November 1921, was less than smooth. The first lorry broke down in Lancashire. Then when the second lorry reached “The Little Rest” on the lower part of the old Rest and Be Thankful road it would go no further. The treble bell and ironwork frames had to be unloaded to allow the lorry to continue the ascent. However even this was not enough and the second bell had to be left behind as well before the lorry made it to the summit. The abandoned bells and frames were retrieved the following day.

Fabulous perspective - love the wonderful stonework that has stood the test of time.

Nice shot, the monochrome brings out the texture of the stonework beautifully

Good strong shot, I echo Doug's thoughts about the textures.

Impressive POV and yes, I will be here tomorrow.
You can rely on me Jules. ;-)

Sure I'll be there :-) Very impressive low-angle

These shots of towers from the ground are awesome, and a study in neat old stone structure. I love the smear of cloud and light beams up there competing for attention so unlikely against this formidable thing.

We want to climb un in the sky!

A nice B&W. And I like the framing too

Wonderful POV! I really like it in b&w. It brings out the detail!

A splendid angle shooting, and a beautiful black and white. A great picture, I love.