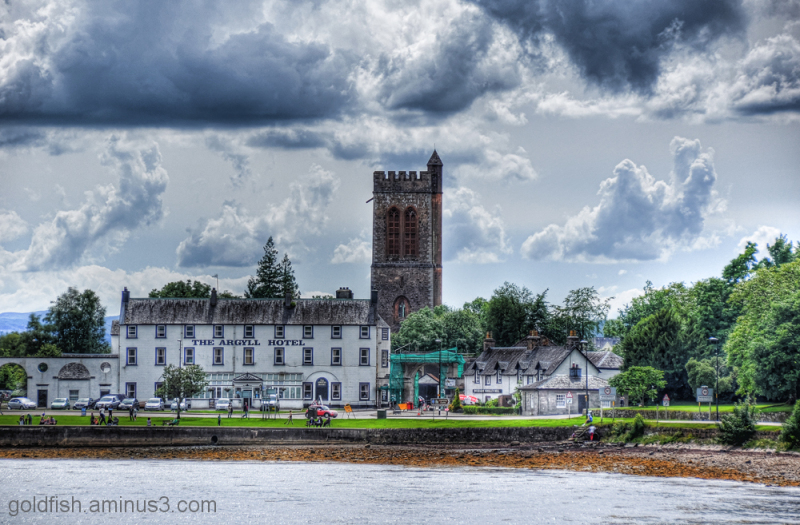 Inveraray from the Aray Bridge 2/2

Posted by Jules (Drayton, United Kingdom) on 28 September 2012 in Cityscape & Urban and Portfolio.

Final shot from the Aray bridge - and zooming in on the All Saints Bell Tower.

In 1914 the 10th Duke of Argyll, Niall Diarmid Campbell, became the Honorary Colonel of The 8th Battalion of The Argyll and Sutherland Highlanders. When the First World War ended he decided that there should be a fitting memorial to commemorate the Clan Campbell dead. To this end he commissioned architects Hoare and Wheeler to design the Bell Tower, the original idea being to link the new tower to the church.

At the same time John Taylor and Company of Loughborough were approached to cast a peal of 10 bells suitable for the memorial. The bells were cast in 1920 in Loughborough. Their transport from there to Inveraray, which took place in November 1921, was less than smooth. The first lorry broke down in Lancashire. Then when the second lorry reached “The Little Rest” on the lower part of the old Rest and Be Thankful road it would go no further. The treble bell and ironwork frames had to be unloaded to allow the lorry to continue the ascent. However even this was not enough and the second bell had to be left behind as well before the lorry made it to the summit. The abandoned bells and frames were retrieved the following day.
..........☆..........

wow.. this hotel is so nice
Spectacular scenery and sky

This totally convinces me....clouds make the most awesome compositions. The architecture is great too.

I was here in June, it's a great place, the building is wonderful, did you go down and look at the old boat in the harbour

@P J W Miller: Yes I did see them and I have posted a photo of both the Artic Penguin and Vital Spark which should go live next Friday (05/10/12)

Gorgeous processing for this Jules, crisp and sharp!

Those clouds look like they were ordered up for the occasion in perfect formation - a lovely 'oneness' to this.

Beautiful composition and very interesting text about the bells .

A cracking scene with a brilliant sky,a tad too much processing for my taste though that softens the trees too much.

Glorious image - and love the view over the water.

Wow, that sounds like it was a royal pain in the arse! :-)) Great shooting, Jules - the details and colors are astounding!

Very well done! It almost look like a painting!

I sure like the process that makes this look so much like a tinted post card of the actual time period you describe. What neat texture, and a grand old place. I enjoy your history lesson, and the Bell ordeal. Almost a comedy of obstical and opposition by the fates.

Interesting view and different angle from the one posted yesterday. Great PP Jules !

Great shot of this spectacular place !!! I like how the tower stands out against the wonderful cloudy sky ... Excellent treatment

i like these elegant, white and black houses in the town ! this is another very appealing presentation !!

Very beautiful hotel and architecture of the bell tower ... a lovely spot along the water! Fantastic photo!

Perhaps a bit overcooked, but a nice cityscape with interesting bright details.

Stunning! The processing looks like HDR. The details are so vivid. I love the way you framed this.

Gorgeous image. I really like the architecture of the hotel and the bell tower. Those bells certainly have a history. I love the clouds!