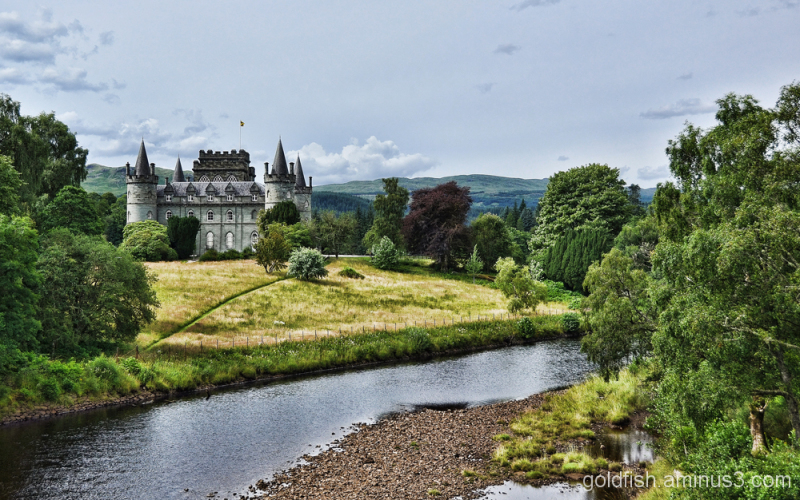 Posted by Jules (Drayton, United Kingdom) on 26 September 2012 in Architecture and Portfolio.

a closer look upstream from the Aray bridge, towards Inveraray Castle.

I have to confess that the day this and yesterdays photo were taken, the castle was being used for the filming of scenes for the new series of "Downton Abbey". Parked in front and to the right of the castle were several rigging trucks which somewhat spoiled the scene so with a liberal application of the clone brush in photoshop, I took the liberty of removing them. Original image here
..........☆..........

You did a great job of removing the trucks. Very nice photo. Great scene.

You did very well !! The place is so beautiful.

Thanks for the before-and-after. You did the right thing !

Great work with the processing, superb image, it's a beautiful castle

Think i prefer this one to even yesterdays, with the castle appearing closer you can appreciate its size and majesty a little more, very impressive.

Excellent!
Have a nice day.

Beautiful long view, Jules. Yes - the trucks certainly got in the way of an otherwise excellent point of view. No doubt these TV shows are also careful to remove from the image any traces of the modern world!

You have done an amazing job of removing the trucks.. excellent shot

you did well to "erase" them .... such things can be a real nuisance (though necessary if one wants to enjoy more instalments of the series ... ;-))

Really great work cloning out the offending vehicles, Jules. I'm glad you decided to rid the image of those and show the castle to us as it was meant to be seen. Great work!

You did a fine job of removing the distractions. This is such a beautiful place.

Fantastic castle ! I MUST go to Scotland.
An ideal place for who loves History.

I'm glad you cloned out the ugly bits - it is a stunning .

You did a great job brushing the trucks away ... it really looks much better without them.
Beautiful shot of this wonderful castle !!!

We never would have guessed! You did a wonderful job hiding the trucks! Gorgeous image!

Incredible how you did it! I just love this fairy tale castle!

Thanks for giving us both views. Isn't reality just a mix of perspectives? But the subject, that great old castle, transcends time and man's machinery. Like too the river running through it. :-)