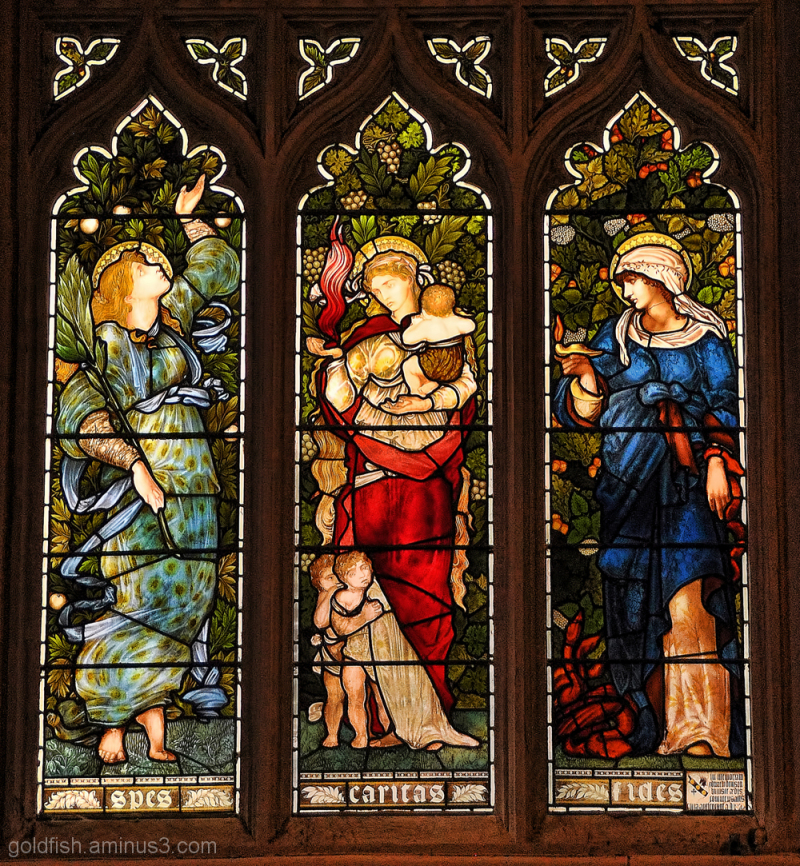 Posted by Jules (Drayton, United Kingdom) on 1 June 2012 in Art & Design and Portfolio.

Posted for the Aminus3 theme "The Power of Three"

Their mother is said to have been Sophia (Greek for Wisdom); though Sapientia (Latin for Wisdom) is also mentioned in some accounts but not as their mother. According to the Catholic Encyclopedia, these were, in fact, two groups bearing by coincidence the same names.

The names are also the words designating the three key Christian virtues mentioned in the Apostle Paul's First Epistle to the Corinthians.

Beautifully made image . . I sometimes think photography is the best way to view stained glass !

Not a single hot pixel in there, just magnificent.

Crop is perfect and colors are so vibrant ! A great work Jules. Those stained glasses deserve such a wonderful process, they truly are gorgeous. Look like they've been made a week ago.

Lovely shot. The old stain glass windows are so beautiful. what cracking set of pictures so far.

These are gorgeous windows, and well captured too

Excellent shooting to capture all of these wonderful details and colors, Jules. Well done!

Stained glass windows are truly a marvel. So under appreciated by modern youth. Definitely well captured. I agree that photography is a great way to view stained glass.

Congratulations on the forthcoming Color SPOTLIGHT in advance

This is absolutely beautiful! The color and light are perfect.

I love this shot. Stained glass windows are so hard to capture, given the light issues, but you have nailed this one. 5*****

Superb image of these three, spot on for exposure too from the looks

wow! what a pity MadScientist isn't about to see the beauty of this!