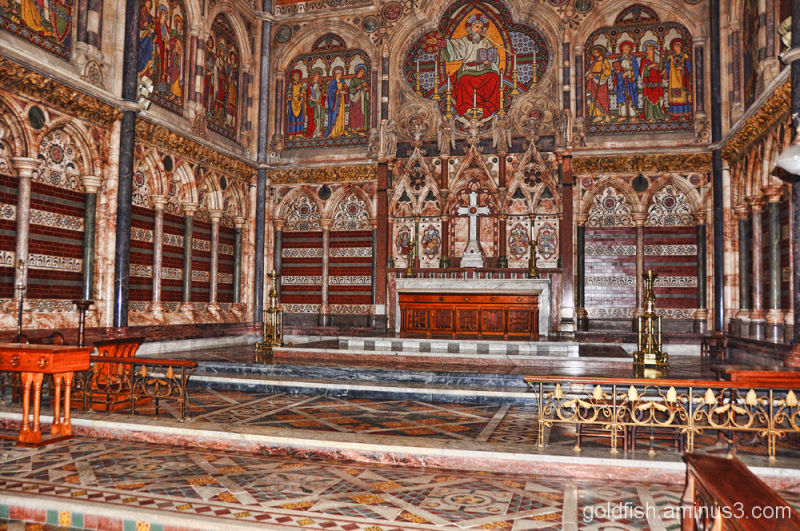 Posted by Jules (Drayton, United Kingdom) on 23 April 2012 in Architecture and Portfolio.

The ornate mosaic and tiled interior of Keble College chapel which is full of colour and abstract geometrical patterns. Designed by William Butterfield, Keble College came towards the end of his career, when his idiosyncratic talent had been well tried and tested.

Keble College being one of the constituent colleges of the University of Oxford, was established in 1870. Having been built as a monument to John Keble, it remains distinctive for its once-controversial neo-gothic red-brick buildings designed by William Butterfield. The buildings are also notable for breaking from Oxbridge tradition by arranging rooms along corridors rather than around staircases.

Among the many former students of Keble College - there is one who stands out as a major influence in my life - My father who studied history there from 1937 to 1939.

excellent shot
Have a lovely day

Gorgeous shot, the level of illumination is incredible, ally that to the rich colours and fine details and you have this winner.

Marvellous colour and detail you capture here. The geometric patterns must be quite unique for the period.

Such intricate details in this shot with the most gorgeous of colors. Nicely done, Jules!

Wow! That must have cost a fortune!

What an amazing display of detailed decor. Just sings doesn't it?

What an amazing design you can only imaging the hours and skill it took to do this. Beautiful image Jules

what a wealth of shapes and colours and design elements!! very appealing frame and processing!

Stunning processing to highlight all these amazing details.

Beautiful image. There is so much gorgeous detail and color! Beautiful processing!

Stunning details and colors on these mosaic and tiles !!!! Excellent processing ....