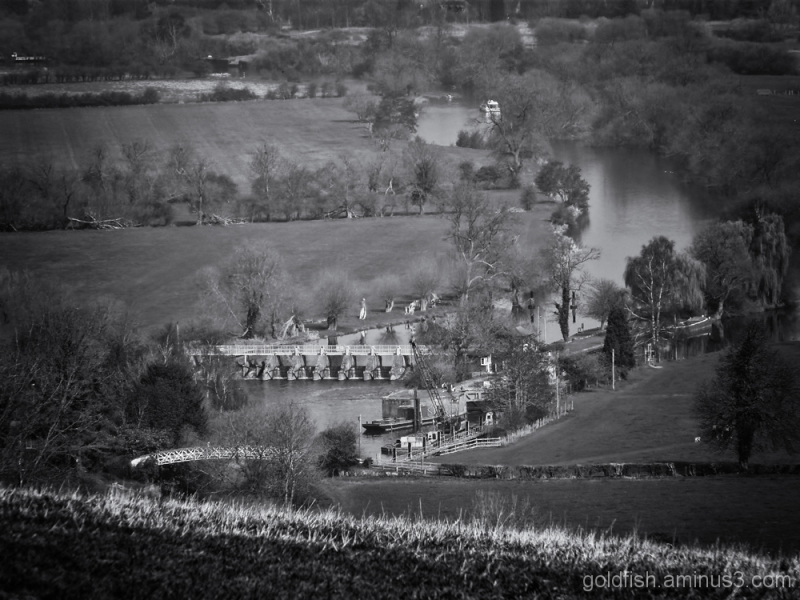 Posted by Jules (Drayton, United Kingdom) on 6 April 2012 in Landscape & Rural and Portfolio.

The view north overlooks Day's Lock on the River Thames near Dorchester-on-Thames. Day's Lock is the main gauging station for the measurement of the water flow in the River Thames. The World Poohsticks Championships, on behalf of the RNLI, have taken place annually here since 1983.

A superb view and a B & W luminous, splendid image. Good day.

First off, a super black and white landscape Jules.
I cannot help chuckling though, Poohsticks Championships, near a place called Wittenham Clumps??
Your ancestors down there must have had great laughs when they thought of these.

@Curly: LOL they're not my ancestors (relief) and you couldn't make it up if you tried!!!!

What a wonderful photographic sight this makes - it is as if it has been lit for the occasion of your image !

Poohsticks championship. Man, I really never thought I would meet a real competitor in this elite and specialised sport! Do you carb load before each event, practice your skills using a dartbaord, wear special trainers that get you from one side of the bridge to the other? What really are the dark secrets for a world winning performance?. I'm in awe-tell more! Oh, and what a great shot as well

@CElliottUK: I must disappoint you but I have never participated nor for that fact ever attended the poohsticks championship but it would make a great series on AM3

great frame but with more contrast or rendering you will bring up more details .... somehow all upper part is melted into unclear picture .

@Mariana M.: thanks for you advice - It was a such a hazy day and that is causing the "melted" feel. The contrast is turned up already and I doubt it would have helped improve the final image.

Gorgeous landscape and wonderful b&w. What are the Poohsticks Championships? Sounds interesting.

@Elaine Hancock: from "Winnie the Pooh" - a game where sticks are dropped on one side of a bridge and the winner is the owner first of the first stick to reappear on the other side.

superb mono and detail Jules...so much to take in.

very attractive BW look at the valley from a very clever angle and pov! love the good range of tonality and the view into the distance ...