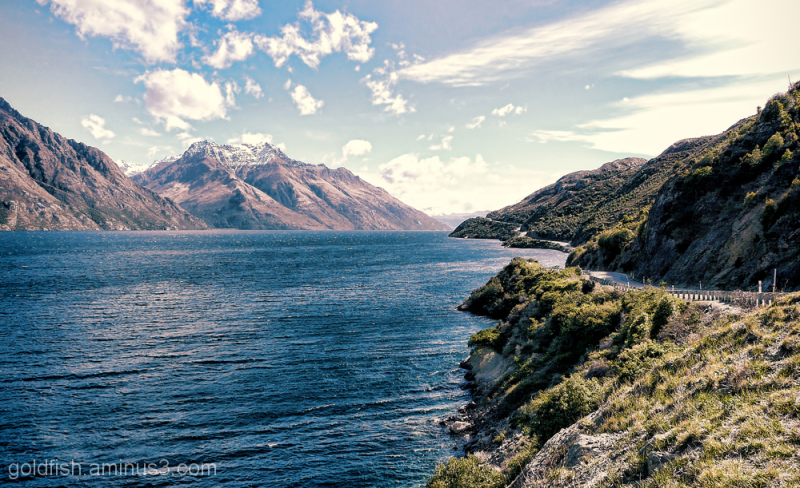 Posted by Jules (Drayton, United Kingdom) on 23 March 2012 in Landscape & Rural and Portfolio.

Looking north towards the Bayonets and Cecil peak, while State Highway 6 winds its path along the lakes' edge heading towards Queenstown which is just over the horizon.

Lake Wakatipu is the second largest of the southern glacial lakes and is 48 miles long and up to 3 miles wide, it covers an area of 113 sq. miles and is shaped like a reversed "N" or "dog leg". The lake is 1,017 ft above sea level and is 1,239 ft deep. It is bordered on all sides by glaciated mountains, the highest of which is Mount Earnslaw near the head of the lake.

Lake Wakatipu is associated with many Maori legends, especially those accounting for its origin. Perhaps the most popular ascribes it as due to the labours of the famous chief Te Raikaihaitu, pioneer explorer of the interior of the South Island. He brought with him from his former home in the tropics a long wooden spade (ko), and with this he dug the inland lakes. Legend affirms that Wakatipu was the most difficult to dig because of its great depth, its rocky surroundings, and its high mountains.

One of Wakatipu's mysteries is the rise and fall of the lake by about 12cm every five minutes. Legend states that a Giant's heart is impossible to destroy and this rise and fall is attributed to the still beating heart of Matau, who according to Maori legend was burnt to death in his sleep after he abducted a chief's daughter, burning a massive hole in the ground and melting the ice and snow of the surrounding mountains, forming the lake.

According to the studies by the Swiss hydrologist François-Alphonse Forel in 1890, it is actually caused by a natural resonant oscillation called a seiche. Forel was the first to make scientific observations of this effect on Lake Geneva, Switzerland and subsequently proved that every enclosed body of water has a number of natural resonances, created by factors including wind and atmospheric pressures and with the oscillation frequency determined by the size of the basin, its depth, contours, and by the water temperature.

That looks like a very scenic road to travel, very interesting information on the lake

I love the color of the water here, what a vibrant blue.

Superb view, I think I'd rather be a passenger driving along that road so I could take in all that incredible scenery. Wonderful image Jules

@Doug: NZ is one of those places where you simply have to stop every five minutes to take in the scenery and take photos! - looking back I am amazed that I actually kept the car on the road and didn't end up in a ditch.

So much like the English Lakes don't you think?
Great picture full of lively colours and sharp highlights.

@Curly: Yes, but only in the sense there are mountains and a body of water! - If I had to make a likeness I would be more inclined to make a comparison with the lochs of the Scottish highlands but even these fall short of the glacial lakes and fiords on the south Island. It is simply down to the sheer scale of the place - Wakatipu is 48 miles long whereas Windermere is a "mere" 11 miles at best - The highest peak on Wakapitu is Mount Earnslaw which stands at 2819m high - Scafell Pike the largest peak the Lake District has to offer is only 978m. Because of this scale variance we also experience differences to geographical factors, such as the local fauna and flora, wildlife and ultimately climate.

So beautiful - I love what you've done here to bring out the details in the landscape. Great work!

The highway curving its way around the lake shore creates a magnificent perspective.

What a lush/rugged beauty this is, and I like the chief's story better. Oscillations for heaven's sakes, sounds typical scientific bolderdash slap it on label... :-D (I see sleeping giants for mountains, too.)

Locely shot, with a kind of ektachrome feel to it

So beautiful! My eye is pulled along the road into the distance.

this is one of those images that make me want to get up, pack my bags and hit the roads ...
incredibly beautiful and inviting ... and if i look hard, i can see a sign beside the road with my name on it ... ;-))

@franz: yeah I see that sign too - its just after the sign with my name on it LOL. If you ever have the opportunity to visit NZ, I would without hesitation urge you to take it :-)

I'm so impressed with the good weather you had on your trip to the SI. I've heard of some pretty disastrous weather for others. Love this composition with the road winding alongside the lake.

@kiwisa: The weather was indeed very kind to us during our time in NZ and I guess very lucky :)

This is just beautiful! You can tell just by looking at the lake that it is deep!

Fantastic natural scenery, beautiful textures of the greenery on the mountainside. Lovely shot!

great light and exposure! the textures and detail are once again brilliant!

Congatulations Jules!
This gorgeous landscape is one of the pictures of the week.
Love the view and the processing!