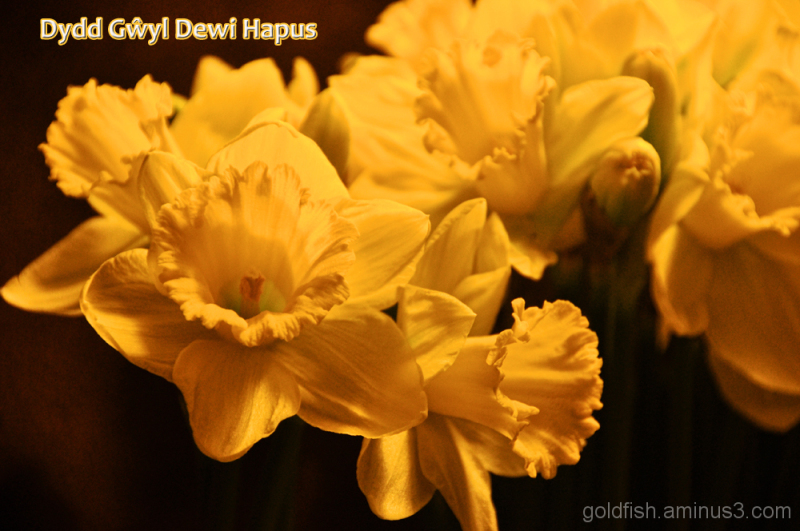 Posted by Jules (Drayton, United Kingdom) on 1 March 2012 in Lifestyle & Culture and Portfolio.

St David's Day is celebrated in Wales on 1st March, in honour of Dewi Sant or St David, the patron saint of Wales. It is the custom on 1st March to wear either a leek or a daffodil - two of our national emblems.

Little is known about him for certain. What little information we have is based on an account of his life written by Rhigyfarch towards the end of the 11th century. According to this Latin manuscript, Dewi died in the year 589. His mother was called Non, and his father, Sant, was the son of Ceredig, King of Ceredigion. After being educated in Cardiganshire, he went on pilgrimage through south Wales and the west of England, where it is said that he founded religious centres such as Glastonbury and Croyland. He even went on a pilgrimage to Jerusalem, where he was made archbishop.

He eventually settled at Glyn Rhosyn (St David's), in south-west Wales, where he established a very strict ascetic religious community. Many miracles have been attributed to him, the most incredible of which was performed when he was preaching at the Synod of Llanddewibrefi - he caused the ground to rise underneath him so that he could be seen and heard by all. How much truth is in this account of his life by Rhigyfarch is hard to tell. It must be considered that Rhigyfarch was the son of the Bishop of St David's, and that the Life was written as propaganda to establish Dewi's superiority and defend the bishopric from being taken over by Canterbury and the Normans.

From the 12th century onwards, Dewi's fame spread throughout South Wales and as far as Ireland and Brittany. St David's Cathedral became a popular centre of pilgrimage, particularly after Dewi was officially recognised as a Catholic saint in 1120. From this period on, he was frequently referred to in the work of medieval Welsh poets such as Iolo Goch and Lewys Glyn Cothi. In 1398, it was ordained that his feast-day was to be kept by every church in the Province of Canterbury. Though the feast of Dewi as a religious festival came to an end with the Protestant Reformation in the 16th century, the day of his death became a national festival during the 18th century.

Beautifully done, nice use of a dark background to promote contrast.

Happy St.Davids day,I hope you get to nibble on a Welshcake or slice of Bara brith today.I´m in the kitchen baking mine right now !!

Super detail - have a good day !

what a nice shot
Have a lovely day

Happy St David's Day Jules. Fascinating history you've given us and a stunning image as well

all the best to you and yours on this special day!
fascinating story to go with a remarkable man! we visited st. davids last summer, and as before we were most impressed! though the cathedral may be small, it is surely one of the loveliest in britain ...

This is beautiful. I love the warm tones and light

Thank you for this interesting old history, and a luscious image of these golden flowers on the dark background that just makes them pop so deliciously.