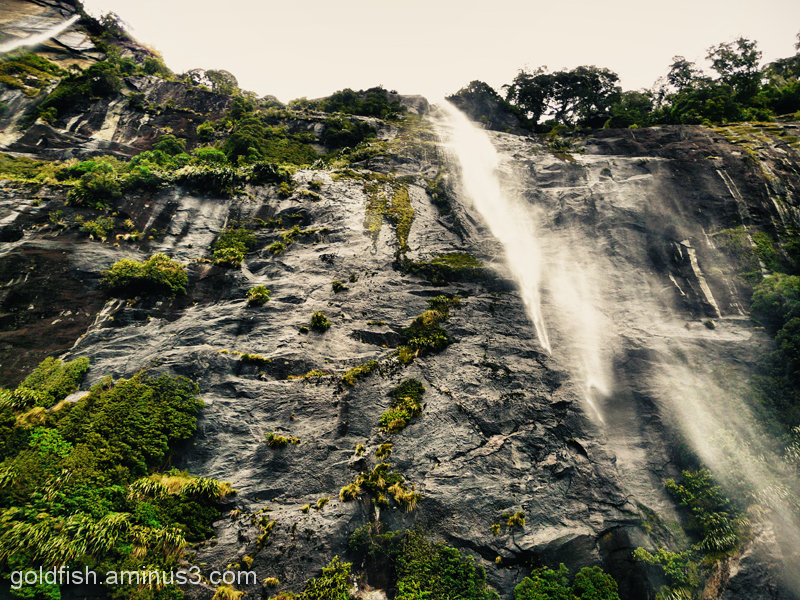 Posted by Jules (Drayton, United Kingdom) on 18 January 2012 in Landscape & Rural and Portfolio.

Milford Sound (Piopiotahi in Māori) is a fiord in the south west of New Zealand's South Island, within Fiordland National Park, Piopiotahi (Milford Sound) Marine Reserve, and the Te Wahipounamu World Heritage site. It has been judged as one of the world's top travel destinations and is acclaimed as New Zealand's most famous tourist destination. Rudyard Kipling had previously called it the eighth Wonder of the World.

Named after Milford Haven in Wales, the hometown of Captain John Grono who discovered it around 1812. A few years later it was renamed to Milford Sound by Captain John Lort Stokes. Prior to the European arrival the fiord was a playground for the local Māori who understood the migrations of local marine life and the tidal patterns.

Milford Sound runs 15 kilometres inland from the Tasman Sea at Dale Point - the mouth of the fiord - and is surrounded by sheer rock faces that rise 1,200 metres (3,900 ft) or more on either side. Among the peaks are The Elephant at 1,517 metres (4,977 ft) and The Lion, 1,302 metres (4,272 ft). Lush rain forests cling precariously to the cliffs and occasionally portions of the rain forest will lose their grip on the sheer rock face, the resulting tree avalanches leave scars of bare rock amongst the vegetation.

The sound sports two permanent waterfalls (Lady Bowen & Stirling Falls), although after prolonged rainfall many more additional waterfalls can be seen cascading down the sheer rock faces. As Milford is renowned as the wettest inhabited place in New Zealand and one of the wettest in the world it is commonplace to see these temporary falls.

As of the 2006 census, just 120 people lived in Milford Sound, most of them working in tourism or conservation.

Excellent shot, I love the luminosity that you have worked into the vegetation.

Majestic image with the veil of water cascading down the rock face. Superb light as well!

impressive from this very nice angle!

great perspective here - it gives the falls a dramatic look full of energy and power! it almost feel like the water will come down straight on my face - nicely done!