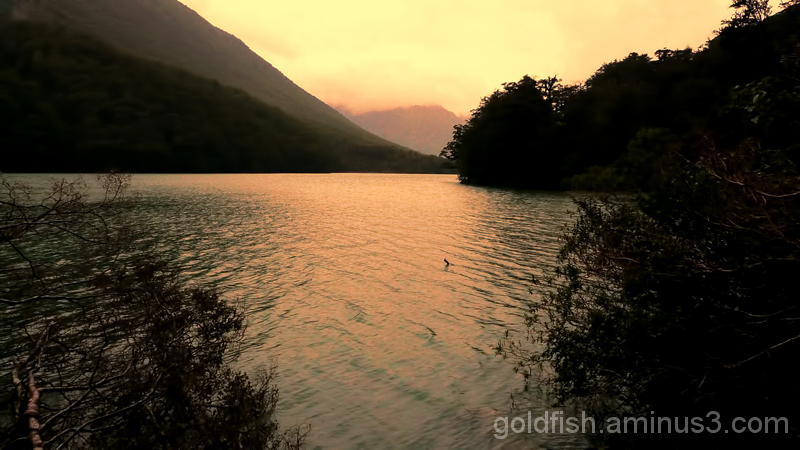 Posted by Jules (Drayton, United Kingdom) on 21 December 2011 in Landscape & Rural and Portfolio.

Lake Gunn is at an elevation of 480m and has a max length of 4km. The lake is surrounded by native bush and several smaller lakes lie nearby, including Lake Fergus and Lake McKellar. Several mountains stand close to the lake's western shore, notably Melita Peak (1680 m) and Consolation Peak (1760 m). "The Divide", the saddle between the valleys of the Eglinton and Hollyford Rivers, lies four kilometres north of the lake.

The lake was named after George Gunn, a runholder (a lease holder), who discovered the lake in 1861

This series follows our journey along State Highway 94 as we travelled from Te Anau to Milford Sound. The route is 73 miles (119km) long and it is regarded as one of the most scenic roads in New Zealand; with a peak elevation of 940m, it is also one of the country's highest. The road travels up the eastern side of Lake Te Anau along the lateral moraine left behind after the retreat of the glaciers at the end of the last ice age.

From Te Anau Downs, the road veers right and enters the Eglinton Valley. The road then runs parallel to the right side of the Eglinton River for 20 miles while it passes through Knobs Flat. At Cascade Creek, the road emerges onto the shorelines of Lake Gunn and Lake Fergus. The road then passes through a saddle and emerges at the upper section of the Hollyford Valley.

After Hollyford, the road veers to the west and rises steadily along the valley to its highest point at the Homer Tunnel. At 1270 metres long it is the second-longest road tunnel in New Zealand. The road then emerges at the head of the Cleddau Valley and the road spends its last 10 miles descending along the valley to Milford Sound.

Stunning capture of the light on the water and I like the soft outline of the mountains across the shore.

this is beautiful. I love the tones and the light on the water

Superb tones in this image, the scenery you're showing us on this journey is just incredible

Beautiful place and moment above all. Everything seems so quiet and peaceful. So far away from our crowdy, noisy and dirty cities.

Beautiful...Loved The Low Angle On that Shot

Such a peaceful place

A beauty! Really gorgeous image to stare at it.

Very beautiful and relaxing scene, I can hear the water lapping against the foliage and land.

Beautiful light and a gorgeous landscape!

gorgeous light and processing ... beautiful scenery, as ever !!

Nice light in this image.

love the light and the subtle colour tones that set a fantastic mood for this scene - superbly captured!