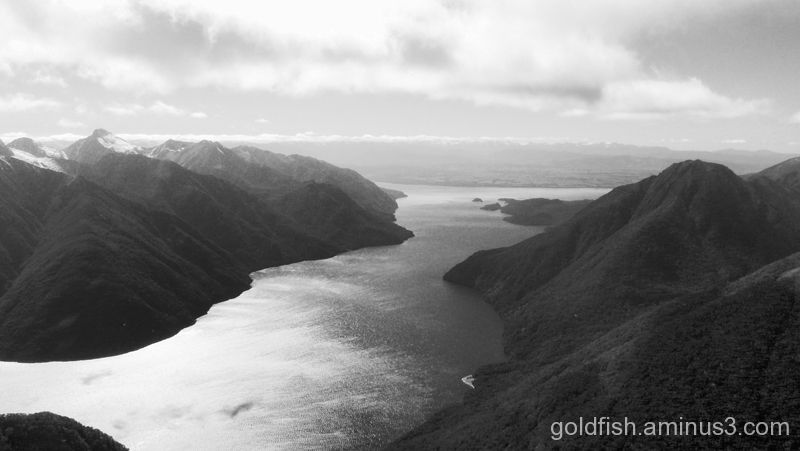 Posted by Jules (Drayton, United Kingdom) on 8 September 2011 in Landscape & Rural and Portfolio.

Numerous species of wildlife and vegetation are found in the watershed of Lake Te Anau. Vegetative understory includes numerous fern species including the Crown Fern, Blechnum discolor. Several species of endangered birds live around the shores of Lake Te Anau, notably the Takahē (Notornis hochstetteri). An area between the Middle and South Fiords called the Murchison Mountains (seen on the left) is a sanctuary set aside for these birds. The western shore of the lake also features the Te Ana-au Caves, from which the lake derives its name.

Superb vista with the silvery fiord set between these grand mountain ranges.

Terrific black and white landscape, one gets the feeling that you were hanging out of a chopper to take this one!

Somptuous ! So beautiful with this light !

awesome vista, like from a plane! but i suppose you had walked up there ... ;-))

@franz: It was a 6hr tramp up the Kepler track from Brod Bay (shuttle boat from Te Anau) to the summit of Mt Luxmore (1400m) - it was a quite a long slog but a fairly easy climb, as the whole track is superbly maintained. The only downside was the pesky Sandflies that feasted on our blood while we waited for our shuttle boat on the way back to Te Anau at the end of the day. There will at some stage be a series from our Kepler track adventure as it offered some amazing views.

The view is amazing